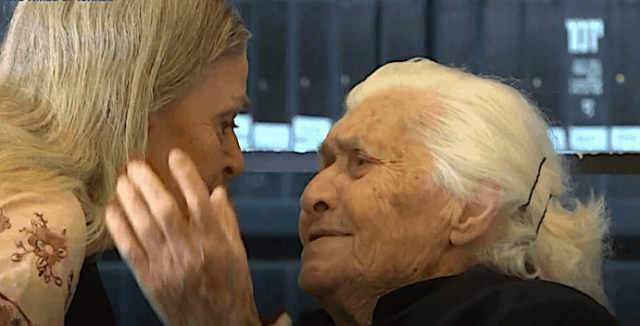 92-year-old Melpomeni Dina, from the town of Veria in northern Greece, met for the first time on Sunday in Jerusalem the descendants of a Jewish family she helped save during the Holocaust.

One by one, the 40 descendants of the Mordechai family leaned down and warmly hugged the elderly Greek woman to whom they owe their very existence, as she sat in her wheelchair, wiping away the tears which continuously streaked down her face.

Clutching the hands of those she hid, fed and protected as a teenager more than 75 years ago, 92-year-old Dina said she could now “die quietly,” according to a report from the Associated Press.

“The risk they took upon themselves to take in an entire family, knowing that it put them and everyone around them in danger…” Sarah Yanai, now 86, who was the oldest of the five siblings Dina and others sheltered, was quoted as saying.

The Mordechai family once lived in Veria, Greece, near Thessaloniki, where nearly the entire Jewish community was annihilated within a space of a few months, in one of the most brutal actions of the Nazis. 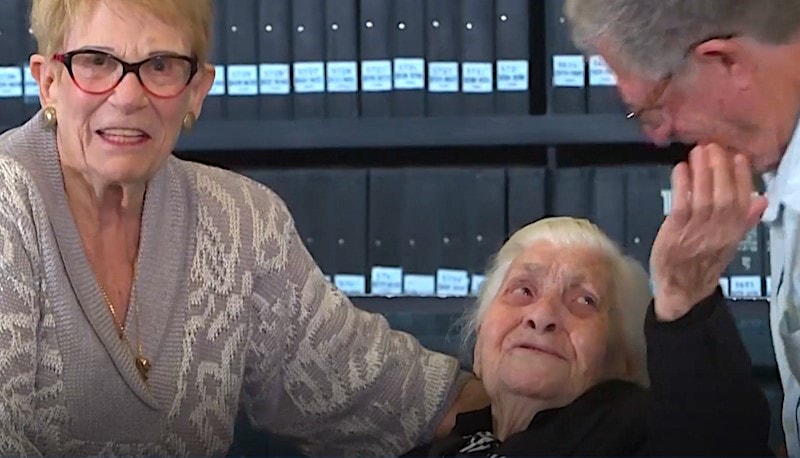 When the Nazis began rounding up Jews for deportation in early 1943, the family’s non-Jewish friends provided them with fake identity cards and hid them in the attic of the old abandoned Turkish mosque nearby.

They hid there for almost one entire year, while often hearing screams and cries outside the building — the sounds of other Jews being rounded up by the Nazi troops. But eventually, they were forced to leave this safe hiding spot because their health was declining in the cramped, unventilated attic of the mosque.

That was when Dina and her two older sisters took the family of seven into their own single-room home on the outskirts of the city, sharing with them their own meager wartime food rations.

One of the Mordechai children, a 6-year-old boy named Shmuel, became gravely ill at one point and had to be taken to a hospital, despite the risk of exposing his identity. He unfortunately died there at the facility.

Shortly after that, an informant cruelly informed upon the Mordechai family, disclosing their location.

Dina and her orphaned and impoverished sisters provided the Mordechais with clothing before their departure, and then they and their relatives helped them flee, taking them in various directions outside the city.

Yanai, the oldest, headed for the woods; another went to the mountains; and the mother of the family headed out on foot with her youngest two surviving children in search of another hiding spot.

The family miraculously was able to reunite together after liberation and with difficulty even made their way to Israel, where the children thrived and eventually came to raise successful families of their own.

Yossi Mor, now 77, was just an infant when his family was taken in, but he said he could still remember a few things, including when his older brother died and the kindness they encountered from their rescuers — who gave them various forms of refuge for nearly two years.

“They fed us, they gave us medicine, they gave us the protection, everything, they washed our clothes,” he said, before gesturing toward Dina. “She loved me very much.”

Mor and Yanai had been able to meet with Dina in Greece years ago. But the younger generation of their extended family, which included grade-school children in pigtails and soldiers in uniform, had never met their family’s rescuer before Sunday’s moving ceremony.

The emotional encounter was arranged by the organization “Righteous Among the Nations,” which awards Israel’s highest honor to those non-Jews who risked their lives to save Jews during the Holocaust.

More than 27,000 people, including some 355 from Greece, have been recognized as “Righteous Among the Nations.”