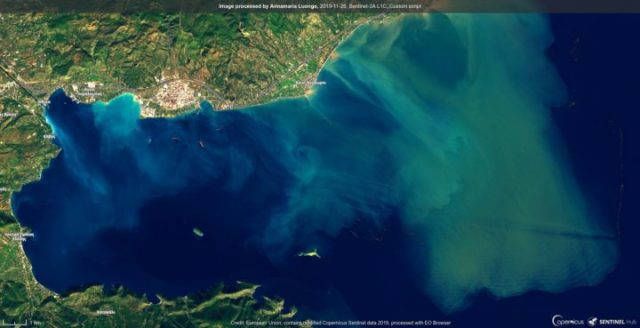 Satellite images of Kineta, the town in Attica which has suffered so greatly from extensive flooding since Monday, depict the extent of the catastrophe that struck the area.The images come from the European Sentinel-2 satellite, part of the European Union’s Copernicus Program.

The images show the discoloration of thermally sapphire-blue waters off the coast of Kineta by runoff from the violent rainfall. The massive amounts of rainwater, mud, and debris that had descended from the nearby mountains pushed their way through the land and dumped into the formerly pristine waters, spreading far out into the sea.

Two people have been killed and hundreds of homes have been flooded following heavy rain in #Greece.
Here the situation E of Corinth (Megara, Kineta, …) seen by #Sentinel2🛰️ today 25 November. pic.twitter.com/URe4v1UAjh

The images also depict the burned hectares of forests in the surrounding area caused by the massive wildfires of July, 2019.

The national observatory of Athens’ ”Meteo” service issued a statement on Tuesday noting how serious the consequences of forest fires continue to be, since they so often lead to extensive flooding in the areas where the forest is damaged.

In the meantime, authorities are trying to clear away the mud and debris as quickly as possible, since tons of rocks and earth has been washed down from the nearby mountainslopes to the town of Kineta.

Similar images emerged from the area of Megara in Attica as well, where the extensive rainfall has caused widespread damage to buildings and where there is also a great deal of storm runoff entering the sea.